If you saw my last post, you can tell I love to hike, and so does Xander! It’s kinda hard to tell by looking at him, but he is half Great Pyrenees. He loves to go on long hikes, and here in the Pacific Northwest we have lots of trails to explore. Getting out into the mountains is one of our favorite activities.

We have not, however, been very good about prepping for our hikes. We usually carry far less water than we should. I can’t carry a backpack due to a shoulder injury, and my waist pack only carries a couple small bottles.

Xander to the rescue! He is a strong, healthy 2 year old boy, and he weighs about 100 pounds. He could easily carry our supplies. So I purchased a backpack for him, and it just arrived. Naturally we had to try it out right away.

Finding dog backpacks is easy. Large online retailers like Amazon have many to choose from – it’s choosing just one that’s hard! Color, style, size, you can pretty much get anything you want.

I got a nylon, saddlebag-style by Legendog. At $18.99 it makes a nice starter pack. I don’t want to invest $50 or more until I have Xander totally comfortable with packing.

This is a nice pack. Good sized main bags on each side with multiple smaller pockets. It even comes with a folded up travel bowl in it’s own pocket. It’s lightweight nylon, but I am wondering about it’s overall durability at the seams. That’s something only time and use will tell though. I like the bright color – it makes Xander a whole lot more visible, and less likely to be mistaken for some wild animal when we’re out on the trail.

Xander is very used to me draping things on him, so he didn’t flinch when I slipped the pack over his head and draped on on his back. But not every dog will react as calmly. If you want to teach your dog to wear a pack, introduce it to him slowly. Move in stages.

At each stage, observe your dog closely. Praise your dog! If she stays calm, encourage her with phrases like “Good dog!” and use treats to really reinforce that wearing the pack is a good, positive event.

Look for signs of stress or discomfort, like yawning, avoiding eye contact, or laying ears flat. If you see these, stop, and back up to the last stage your dog was comfortable at.

Lastly, add weight gradually! And be sure to keep it balanced. Today, Xander is carrying my phone in a wallet-type case on one side, and a change purse with a couple dollars in it on the other. Slowly increasing weight gives your dog time to adjust to the feel and motion of the pack on her body, and build strength.

The most important step – have fun! Be sure you and your dog are relaxed and happy, or teaching her to wear a backpack will never succeed. Go as slow as you need to. Just because Xander here picked it up quickly doesn’t mean every dog will. Go at YOUR dog’s pace! Observe her responses to the pack, to the weight.

For more more information about how to train, check out my book Dog Care and Training for the GENIUS. I cover what you need to know about how to observe, understand and communicate with your dog so your training lasts a lifetime. Plus how to do more, like hiking! Follow the link above to my publisher, and use this coupon code “dct-ftg” at checkout for an additional 15% off!

I was interviewed on Pet Radio last week! We had a lovely conversation about dog care, understanding dog behavior and how to train your dog. Give a listen by clicking here.

I’m in the second half of the program, starting 22 minutes in. A big thank you to Robert Hudson for the opportunity to talk with all his listeners. Check out his Oregon Dog Life, and Pet Radio Show  websites and give his Facebook pages a like here and here.

For more about how to understand your dog, establish clear communication and develop a lasting bond, check out my book, Dog Care and Training for the GENIUS. Click on that link and use the coupon code ‘dct-ftg’ (all lower case!) at check out for 15% off! 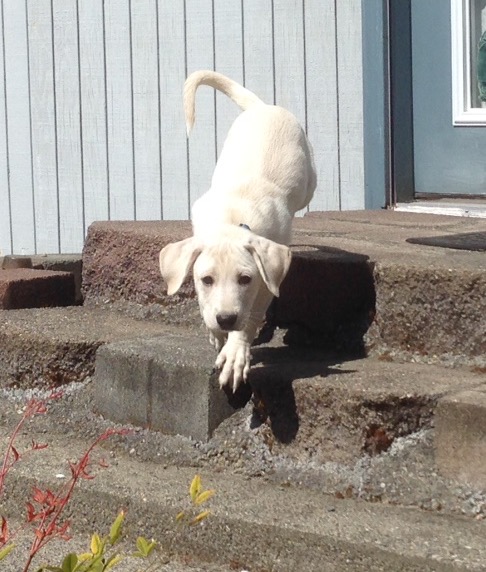 The phrase ‘take baby steps’ describes finishing a task or working through a problem in small increments. Rather than trying to tackle a large issue in one big gulp, you work at in in small, manageable bites.

This is used in humans to treat things like anxiety and phobias. In dogs, it can help with these as well as other training situations.

And you can combine the two to teach your dog some really cool stuff. We’ve all seen those cute memes and cards that have dogs posing with props; sunglasses, clothes, bottles or well, anything really. To catch that perfect pic though is a combination of photographic and training skill.

What? You didn’t think they just slapped those glasses on the dog and took the pic, did you?

Ok, sure, some dogs are extremely tolerant from the start and can be dressed up without any fuss. Most dogs though, need some familiarity with whatever it is that is being put on or near their body. Training your dog to take those super cute pics requires that you systematically desensitize the dog to the object being on or near the dog, and approximate the dog into the desired position. I also talk about this in my post about dogs and Halloween.

While decorating for the holidays I wanted to take some fun  pictures of Xander and came up with the idea of draping lights around him and getting him to pose. But I knew he wasn’t going to just sit there and let those crazy blinky wires wrap around him unless he got to know them first.

So the first thing I asked him to do was just come up and be close to the light string.

The Blinky Stringy Thing just lays there and does nothing, and Xander has no problem being right next to it. While this might not be a very big deal to some dogs, for others anything new in their environment is a Great Big Scary.

He’s looking at me with that big, goofy smile because he knows I’ve got yummy treats. I’ve asked him to Sit and Stay next to the new Blinky Stringy Thing, which means he has to remain in that position while I walk away. While Xander is just fine with this, for some dogs, being far away from Mama or Daddy while next to something potentially dangerous (at least in their eyes) is very stressful. Teach them to be less fearful by rewarding calm behavior as you slowly approximate them closer to a scary object while you move farther away. Baby steps!

First, I have it just barely touching his legs and side.

Then I drape it over his legs.

And finally, lay it over his back.

At each step of the way I gave Xander treats and verbal encouragement. In between each step I released Xander so he could get up, move around and relax. This is important! Allowing Xander to relax away from Blinky String, even for a few moments can be just as rewarding as a treat. I used those moments to give Xander a good scratch and some ear rubs.

Each little step was treated as a fun, quick interaction. For Xander it wasn’t scary, it was playtime with Mama.

Xander was fine when the BST was only loosely placed on him, but when I wrapped it a little tighter, look what happens to his attitude.

But just a few more sessions of wrapping and unwrapping, and I had this. 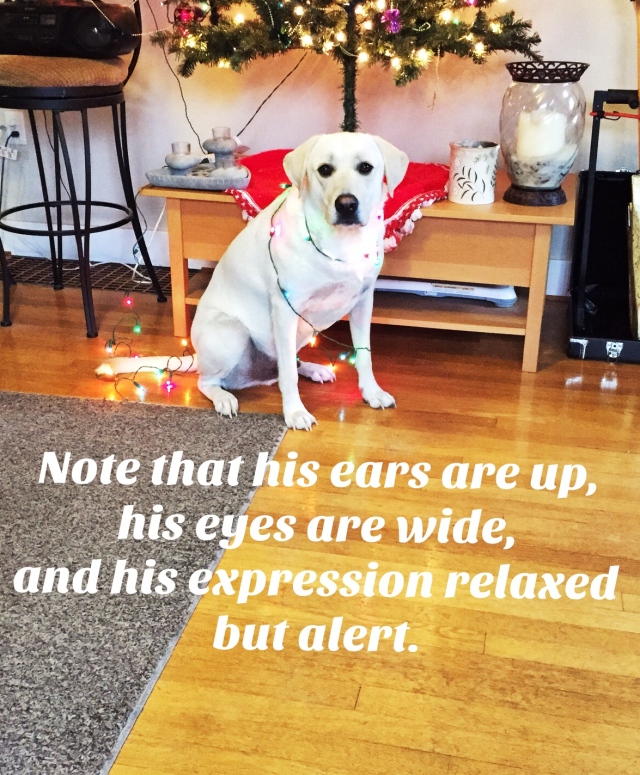 All this took me maybe an hour. I did use a clicker, although in this particular instance a clicker is not a critical tool. It went quickly with Xander because he’s used to working with novel items in his environment. This was the first time I asked him to let me wrap something around him, but he handled it like a pro. He’s such a good dog!

Can you think of ways to adapt this technique to help your dog? Does your dog need to learn how to manage stressful situations? Or do you want to teach your dog how to be the next Doggie Supermodel? Tell me about it down below!

My first book! Not my last I’m sure but there’s something special about your first. It’s been two years in the making and I am so very pleased to share Dog Care and Training for the GENIUS with you.

Training your dog, or any animal, depends upon communication. There must be a clear and open channel between you and your dog or you will both end up frustrated. And here’s a secret:  your dog already is an expert on you. He knows what it means when you pick up your keys and put on your coat. She knows it’s bedtime when you turn off the TV and get up off the couch late at night. Your dog knows everything about you because your dog excels at reading body language and facial expressions.

Here’s another secret:  Your dog is going to act and react based on what your body and face are doing. This may or may not be the same as what you tell him to do. If you don’t understand and use this secret when you train and interact with your dog you will have problems. Knowing how to read your dog and communicate with her is the key to successfully training your dog.

That is why you need this book. I’ll teach you how to open and maintain a clear communication channel between you and your dog.

You can order Dog Care and Training for the GENIUS by following this link. If you use the following coupon code:

The publisher will give you 15% off the price! How cool is that?

I know you will love this book! I thoroughly enjoyed writing it and I am excited to share with you the secrets of dog training success.